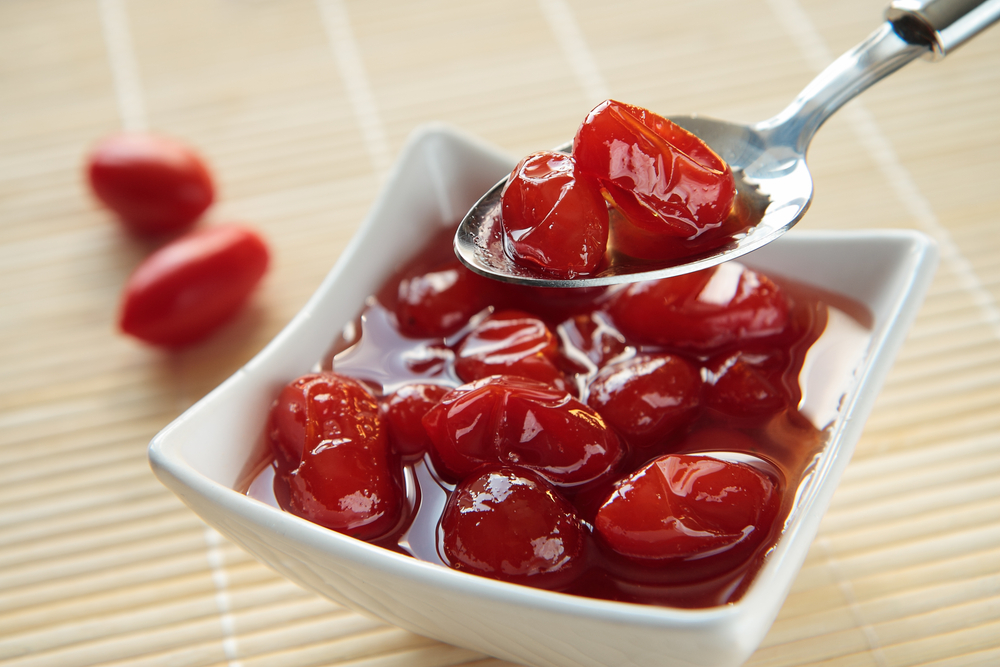 The rich culinary history of Greece and the colourful traditions of the Dodecanese combine to create a unique sweet treat in Kos – made from an unlikely source – the humble tomato.

Kos’ tomato spoon sweet, known as Glyko Tomataki, is a syrupy preserve made with the pomodori tomatoes that grow in abundance on the island. The pomodori variety dates back to when the Dodecanese islands were under Italian rule, and the seeds for these uniquely shaped tomatoes were shipped from Italy. Under the Kos sun they flourished, and became a hallmark of the island’s agricultural industry.

Pomodori tomatoes in Kos are picked in August and many go into the making of Glyko Tomataki, which is made by simmering tomatoes (with their seeds and skin extracted) and bleached almonds with sugar, a dash of water is added, plus a hint of vanilla, and pickling lime to help it set. Recipes for spoon sweets vary as the amount of sugar and other ingredients change according to the type of fruit or vegetable used. Less dense than jam, the fruit in a spoon sweet should be firm and surrounded by a syrup that coats the spoon.

Often served with yoghurt or ice cream, Tomataki is one of a number of similar spoon sweets made in Kos. Other types use pears or figs, and even aubergines.

It was the ancient Greeks who are believed to have first savoured combinations of nuts and fruit with sweeteners like honey and petimezi (grape molasses). But it was during Ottoman times, when parts of Greece were under Turkish rule, that sweet syrup-like preserves of fruit and vegetables became widespread as a delicacy.

Tomataki sits alongside a number of baked treats using honey and thyme as sweet specialities of Kos. Biscuit scones with honey – finikia, and pan-fried crispy pancakes with honey and walnuts – kserotigana, are found at every good bakery and are ‘must try’ for any visitor wanting a taste of authentic Kos.

The famous traditional sweets of Kos can be found at the Astir Odysseus on the menus of our restaurants. Ask our concierge for distinguished bakeries and delis where you can also try the best examples of these sweet treats.

“Smell the sea, and feel the sky. Let your soul

Enjoy an early morning with clear skies and an inf

With our gaze fixed on the sky, we welcome the enc

We are thrilled to announce that our hotel Astir O

Peaceful evenings at our Standard Double Room. No

We are excited to announce that our hotel has been

On the 27th of September, Astir Odysseus celebrate