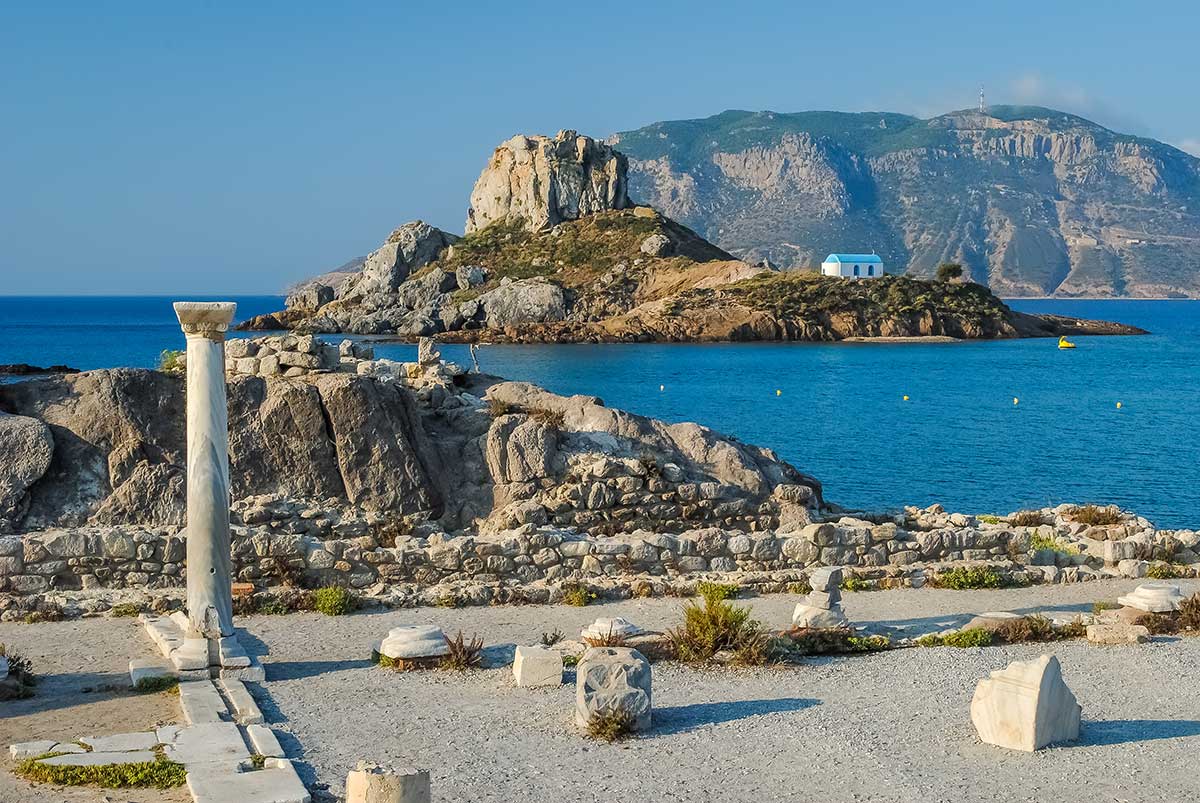 Among the myths surrounding Kos, the one that stands out the brightest has something to do with the island’s genesis, at the dawn of time, when the Giants and Titans fought the Olympian gods.  When Kronos – the god of time and king of Titans – ruled, Zeus and the Olympian gods rebelled and dethroned him and his kind. A celestial, bloody war of apocalyptic proportions – the Gigantomachy – darkened the Mediterranean Sea skies. In the heat of the battle, Poseidon – god of the sea, earthquakes, storms, and horses – chased Polyvotis, the giant, all the way to Kos. Some legends claim that the giant lies under Nisyros:

“They say that Nisyros is a fragment of Cos, and they add the myth that Poseidon when he was pursuing one of the giants, Polybotes, broke off a fragment of Cos with his trident and hurled it upon him, and the missile became an island, Nisyros, with the giant lying beneath it. But some say that he lies beneath Cos,” – Strabo, Geography.

The immortal giant still snarls and breaths fire beneath Nisyros – and if you visit Kos, you should definitely take a day trip to its neighboring island for a hike around the Stefanos crater.

Another myth Koans hold dear relates to Herakles – the demigod – born of the god Zeus and human Alcmene. He landed on Kos after a tempest following his ninth labor, seizing the Amazon Hippolyta’s belt. The storm stranded Herakles and his party on Kos in Kardámena. He had to face Antagoras, the island’s best athlete in Antimachia – and Antagoras defeated the great Greek hero Herakles in a wrestling match. The prise was a ram supposed to roast and feed Herakles and his men. The defeated Herakles disguised himself as a woman and hid in a village called Phixioton, near present-day Pili. The locals crowned Herakles their king, to spite Antagoras’s followers, leading to war between Antimachia and Phixioton.

Euripilos, who was king of Phixioton back then, ordered Herakles’s arrest, but the locals aided the hero in fighting the king. Oddly enough, Herakles decided to kidnap the king’s daughter, Chalkiopi, and marry her, thus leading to the birth of Thessalus, the later king of Nisyros and Leros. Thessalus’s sons became heroes in the Trojan War. In the heat of the battle, Herakles killed Euripilos.

When in Kos Town, visit the temple of Herakles, right next to the iconic Plane Tree of Hippocrates. It lays in ruin, but the magic of the Koan legends still resonates if you listen closely.

Α special day for Greece today as we celebrate Or

Are you looking forward to some intimate moments w

Book now directly on our website and take advantag

We are excited to announce an additional award fro

Following the tragic events of the earthquake in L

May this Easter be a time of happiness, love and j

It is your special day, the day of your wedding an

Today is a special day for Greece! A day of commem

This summer feel the luxury and relish the eleganc

This summer you can get the summer family experien

We are getting closer to summer period. Sunny, car

There is always something to do in Astir Odysseus!

Mediterranean and international cuisine with a cre